THE OATH OF THE LAY ASSUMPTIONISTS IN NAIROBI

The collaboration between Assumptionist Religious and Laypeople is not something new in the Congregation as well as in East Africa Region. This collaboration is not a mere dream; it is rather a reality. Indeed, it is getting deeper and deeper in the minds of both religious and Laypeople. Of course, it has been raised to the status of alliance Lay-Religious. For many years, the Lay were not but workers in assumptionist institutions, benefactors or just friends of the Augustinians of the Assumption. Nowadays, especially from the last two General Chapters (2005 and 2011), they have become members of the Assumptionist Family, sharing the same Charism and spirituality with us.
The presence of Lay Assumptionists in the Congregation is the fruit of the Holy Spirit. As they undergo the formation, they feel the need to commit their lives to the work of the Kingdom of God. This commitment is officially expressed through the making of an oath, sign of seriousness in what they are doing. In this regard, since the Plenary General Council of the Congregation is being held in Nairobi, the Lay Assumptionist took this opportunity to make an extra mile for their vocation by swearing before God, in the Congregation and in the Church.
This great event in the Christian life of the Lay Assumptionist, as well as in the Congregation, started with a retreat which focussed on “Oath: a commitment to a life in Christ” facilitated by Father KASEREKA MUVUNGA Charles. The event itself took place on Sunday June 14, 2015. The mass started at 8:30 in Saint Monica Parish/Njiru. 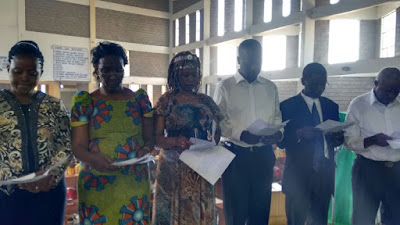 Just before the procession, mister Odhiambo, the chairman of Njiru outstation, announced to the Christian assembly that 13 Lay Assumptionists, namely, JOHN PATRICK KAMAU, ALEX NGANDI MUOKA, PETER MBUTEI, SILVAN GUDA OLELA, HELLEN RUGUTT, JOSEPHINE KAMENE, EVELINE S. KISAKA,  MARY KINYUNGU, TERESIA GATHONI KINUTHIA, TABITHA MUTHONI, MARGARET WANGECHI MBUTEI, EUNICE K MUOKA and RITA MULINGE, were going to take their oath in the Holy Mass and in the hands of Father Benoît Grière, General Superior of the Augustinians of the Assumption. Mister Odhiambo begged the Christians to give to the laureates support of prayers in their journey, so that they may be faithful to their commitments. The oath ceremony started after the creed. It was mainly a set of questions on which the laureates had to respond. They finished by swearing, using this formula:
“In the presence of my brothers and sisters, in your hands, Father Benoît Grière, General Superior, out of love for Christ and in order to extend his Reign, I, ..., make the oath to God for one year, to deepen my baptismal commitment, to practise Charity imparted by the Gospel, and to live in solidarity with the poor, according to the Way of Life of the Lay Assumptionists”.
The ceremony was really very well prepared and it attracted the attention of Christians. This, led the Assumptionists in Nairobi to expect more than 13 Lay Assumptionists for the next oath in the Region. May the Lord bless the Lay Assumptionists and grant them the necessary grace to reach holiness.
Br. Dieudonné Tsongo a.a
Publié par Les Assomptionnistes en Afrique à 08:30 Aucun commentaire: