Assumptionists ! Saint Augustine is our patriarch. To my knowledge, this statement does not newly appear at the sight of the Augustinians of the Assumption. All of us are absolutely aware of that. This is the reason why I intend to share with you how my heart was full of joy to celebrate the saint Augustine day 2015. Saint Augustine, called ‘Augustine of Hippo’ was born in Thagaste, current Algeria, in North Africa (354). Augustine was a brilliant young man whose early life was wild and unsettled. He was converted by the prayer of his mother Saint Monica and baptized by Ambrose, bishop of Milan, in 387.  After his conversion, Augustine decided to live an ascetic life. In Africa, he became Bishop of Hippo. That is when they started calling him Augustine of Hippo. He wrote many treaties that present an exceptional theology and spirituality and have had great influence. According to him, the two dimensions, faith and reason, should not be separated nor opposed, but rather go forward together. In the Contra Academicos, III, 20, 43, he wrote after his conversion, that faith and reason are ‘the two forces that lead us to knowledge. In the Sermons 43; 9, he expresses again the coherent synthesis between faith and reason: Crede ut intelligas that should be translated into “believe so that you may understand”.


Saint Augustine day is the day that the Lord has made. Marked by a golden jubilee and a renewal of vows, our community of Emmanuel House really rejoiced. Father Gilles Blouin (Canadian), missionary in Kenya and member of the community, was, as already pointed out, celebrating his 50th anniversary of his profession in the congregation. Four brothers: Blaise, Emile, Jean-Claude and Fabrice took also the same opportunity to renew their vows. The ambiance in the community was so colorful. The mass started in the evening, at 18h00. It was presided over by father Gilles, the jubilerian. He was surrounded by 6 priests ‘Three Asumptionists, one Montfort and two Palautins. In his homely, Father Gilles, focused on love: God is love. We mention the presence of the Religious of the Assumption and the Oblates of the Assumption. Many other religious from the neighborhood attended also the celebration. After the Eucharist, all the participants were hosted a cocktail party in the dining room to celebrate the day.


Here is a brief story of father Gilles, our jubilerian. He was born in Quebec (Canada) and entered the alumnate in the next town from where he was born. His novitiate was in the USA (1964-1965) and studied theology partly in Europe and in Quebec. His ministry was mostly in pilgrimage centers (Canada and Jerusalem) and in formation houses (Canada, Philippines and now in Kenya). May God bless Father Gilles and remain his guardian for the rest of his life in the congregation and here on earth.

God has been calling people since the origins of the world. In the Old Testament as well as in the New. If we turn our eyes towards the Old Testament we shall find that God called Abraham to leave his father’s home and to go to the land he «the Lord» was going to show him. Gn 12.1. He also called Moses and sent him to the king of Egypt so that he can lead his people out of slavery. Exod. 3. 10. On the same path of calls, he also called Jeremiah:  « I chose you before I gave you life, and before you were born, I selected you to be a prophet to the nations». Jer. 1.5.  In the New Testament, we have figures like Mary, «The Virgin of Nazareth who was called to become mother of the Messiah. Lk 1:30. In Matthew  4, 19, Jesus said to his disciples «come with me and I will teach you how to catch men». Is that not another kind of call? Some people nowadays, ask whether God is really still calling people from their own businesses for his mission the same way he used to do in the past. Of course, yes. But, if there can be a grain of difference it is only that God actually manifests himself in the Church built on the Apostles. Since the Church has gotten the mandate from Jesus Christ (Matthew 16: 18-19.), it is through this Church that the power of God is still moving all over the world. In this same way, that power of God, that is «the spirit of God» lent today upon the Assumption of East Africa.
In the mass that took place at Emmanuel House, this power of God called brother Maticha Nyarombe to the perpetual vows and four novices ( Augustine Byamukama, Edward Kabiito, Kizito Ssembajjwe and Dominic Muendo Mutinda) to the temporary vows. The celebration started at 5 pm. It was presided over by Fr. Emmanuel Kahindo Kihugho, General Vicar of the Congregation. In his homily, Fr. Emmanuel Kahindo Kihugho emphasized the image of the good shepherd who knows and even suffers with his sheep.  The Christians who attended this celebration came from four sides of the world. This, made the mass to be celebrated in many languages.  Congratulations to Fr. Kombi, who did his best to print the readings in three languages: English, French and Spanish. This initiative helped all the community present to walk on the same path. The five congregations of the great family of the Assumption which are Religious of the Assumption RA, Augustinians of the Assumption A.A. Oblates of the Assumption O.A, Little Sisters of the Assumption L.S.A or PESA, the Orants of the Assumption ORA, were represented. This chance was possible because of the meeting they have been holding in Nairobi since July, 9, 2015. At the end of the mass, that is at 7:15 pm all the Christian communities and the invited guests which attended the celebration were invited to the dining room. Together with the brothers and sisters in the Assumption, they cheered the newly committed brothers.
To all the celebrants of the day, using the words of Francis, our Pope, in his last letter on Consecrated Life, I wish them «to leave behind a worldly Church with superficial spirituality  and pastoral trappings, in order to breathe the pure air of the Holy Spirit who frees the religious from the self-centeredness cloaked in an outward religiosity bereft of God. They should not allow themselves to be robbed of the Gospel». And, as a member of the community of Emmanuel House, I sincerely testify that my heart overflows with gratitude to all of those who have actively and silently worked hard to make this day a joyful and memorable one. May God reward them abundantly.
Br. KATHEMBO TSONGO Dieudonne a.a
Publié par Les Assomptionnistes en Afrique à 15:30 Aucun commentaire: Liens vers cet article 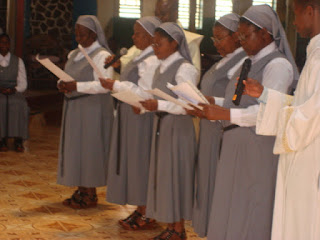 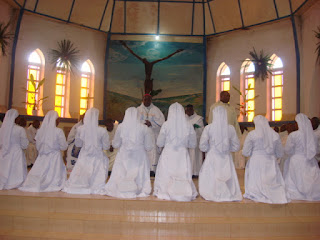